How much concrete can be saved in respect to a ceiling slab solution?

In a calculation of a slab realized with NEW AUTILUS, deformation is the paramater that defines the thickness and the sizing. This value is based on the passiveness of the section concrete+steel. Replacing part of the concrete with NEW NAUTILUS formwork’s empties, the passiveness will decrease, so to mantain a suitable deformation an increase of the slab height is recommended (a few cm).  However, generallly the reduction of concrete weight and consumption varies between the 15 and 20%.

How much steel can be saved in respect to a ceiling slab solution?

In the calculation of a slab realized with NEW NAUTILUS EVO, deformation is the parameter that defines the thickness and the sizing. This value is based on the passiveness of the section concrete+steel. Replacing part of the concrete with NEW NAUTILUS  EVO formwork’s empties, the passiveness will decrease, but at the same time, the slab self weight decreases too. The result is a very small difference between the steel of the traditional and the lightened solution (from the 2% to the 5%).

How does the cast occur?

The cast has to occur during two stages, at different times, more than an hour.

In the first stage the concrete has to cover the foot completely, so that the formwork is blocked. The cast has to be done within the ribs and not directly over the formwork.

The second stage has to occur after a few hours (max 2 hours later, even less if an accelerating admixture was used). This stage consists in the cast completement.

How does the connection with the bearing structure work?

NEW NAUTILUS EVO system permits to work both with punctual supports (pilars) and continued ones (beams or bearing walls). In both cases, it is recommended to leave one or more empty bands near the supports, in order to create a full concrete zone capable of bearing the negative moment and/or the punching press that usually occures in that particular part of the connection. The stress caused by the negative moment and by the punching press can be absorbed by: 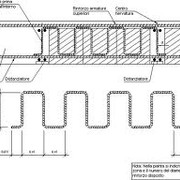 Is it possible to insert expansion and seismic joints?

In the construction of multi-storey buildings the use of joints is important.
Expansion joints have to deal with the concrete shrinkage and swelling on the basis of the heat (these effects can be found in whichever material). This problem can be solved by creating shelves and dividing the slabs cast. The type of joint choice is influenced by the construction type: 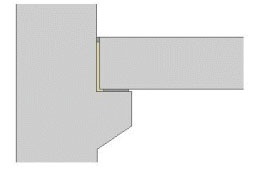 How much do the formworks cost?

NEW NAUTILUS EVO formoworks exist in two versions: single and double. The cost is per item and generally 1.6-1.9 formworks per square metre are needed. To have more information about the prices, please contact solai@geoplast.it 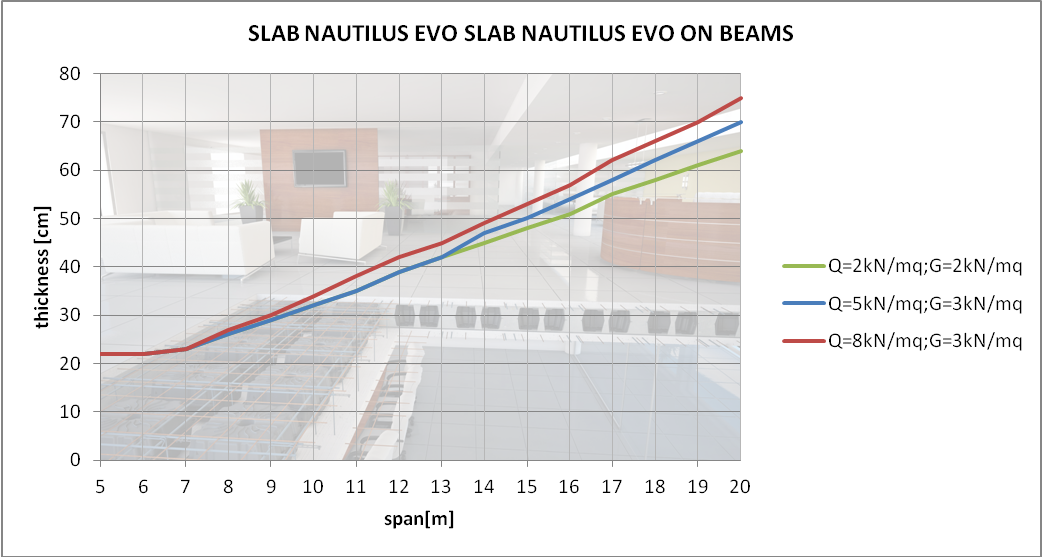 Which are the resistance to fire parameters?

Regarding fire resistance, there’s a regulation which defines the minum values of the lower base and of the slab thickness on the basis of the required strenght class.

Still not certified tests show that a slab realized with a NEW NAUTILUS EVO formwork can reach a REI level of 180 (180 minutes Resistance, Emission, Insulation).

Which are the sound resistance parameters?

Acoustically, some measures have to be considered: insulation of the foot traffic (sound insulation capacity Rw) and acoustic insulation by air between different environments (Lnw).

Which are the maximum loads the system can bear?

The slab sizing depends on many factors: light calculation (distance between two bearing elements), thickness of the applied loads slab (continuous or live), bond conditions (how is the slab linked to the bearing structure). The twist of these, but to have an indication of the slab maximum performance, you should have a look at the following tables that define the thickness and the minumum quantity of reinforcement on the basis of the slab span and the loads: 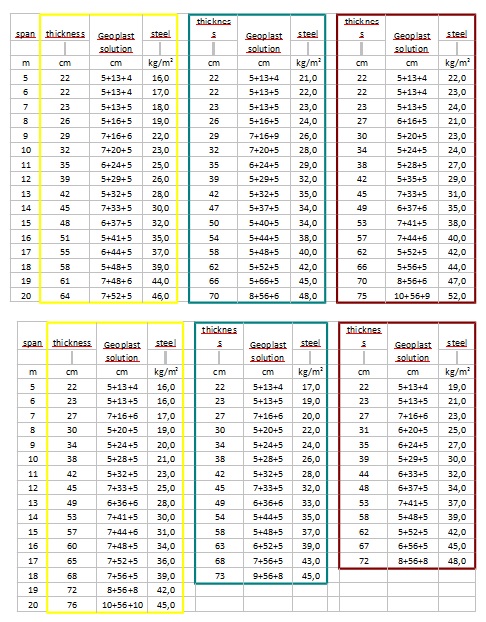 Which type of concrete do I have to use?

The concrete strenght class depends on the sizing, however it can’t be lower than L C25/30 (Rck 300). Its solidity has to be S4 o S5 to guarantee the complete finishing of the lower base even in the case of vibration operations that are done wrong or in the case of cls passage limitations due to high quantities of reinforcement that blocks it. The concrete’s inert maximum size has to be of 32mm. It is possible to use self-levelling concrete and in this case it’s even more important to respect the two pouring stages.

Can I walk over the formworks?

The formworks are certfied to dry walking on them (directly over the plastic even without the mesh), the load tests checks the formwork up to a weight of 150kg to 5x5cm. In the case of a great warmth (>30°C) before walking on them it is recommended to wet the formworks in order to avoid deformations or formworks’ breakages.

Is it possible to drill holes on the slabs?

All types of phonometry are possible, if requierd by the project. During the design stage, reinforcement around the holes have to be provided. For small size holes (up tp 30x30cm) just remove the formwork that should be placed near the hole and insert the tube (stil decked) so that it acts as a formwork.

Are the double formworks already assembled when they arrive in the construction site?

NEW NAUTILUS EVO double formworks aren’t assembled when they arrive in the construction site in order to take advantage of their stackability.

Does Geoplast rely on third parties for the moulding stage?